At 11:00am Pacific Time, the wildly popular Humble Bundle store will launch their first Humble RPG Books Bundle, featuring more than $350 worth of digital Pathfinder RPG rulebooks, campaigns, and more, at a pay-what-you-want price. Customers can also choose how their purchase dollars are allocated between the publisher and Extra Life, a program of the Children’s Miracle Network Hospitals. The Humble RPG Books Bundle: Pathfinder ends on Wednesday, March 9, 2016 at 11:00am Pacific Time.

“We’re thrilled to bring cameras into the Paizo conference room to give gamers a peek at the Pathfinder Roleplaying Game as played by the designers and developers of the game itself,” says Paizo Publisher Erik Mona. “Teaming up with Humble Bundle to raise funds for Extra Life, while giving Pathfinder players and fantasy-lovers a great way to build their Pathfinder RPG libraries, gives gamers an opportunity to do good in the real world as well as in lands populated by dragons and elves.”

For a complete line-up all of the day’s activities, visit Paizo’s Charities page.

About Humble Bundle
Humble Bundle sells digital content through its pay-what-you-want bundle promotions and the Humble Store. When purchasing a bundle, customers choose how much they want to pay and decide where their money goes — between the content creators, charity, and Humble Bundle. Since the company’s launch in 2010, Humble Bundle has raised more than $70 million through the support of its community for a wide range of charities, providing aid for people across the world. For more information, please visithttps://www.humblebundle.com

About Paizo Inc.
Paizo Inc. is publisher of the award-winning Pathfinder Roleplaying Game, Pathfinder Adventure Card Game, Pathfinder Tales novels, as well as board games and accessories. The Pathfinder world, in which players take on the role of brave adventurers fighting to survive in a world beset by magic and evil, is currently translated into eight languages, and has been licensed for comic book series, graphic novels, toys, and apparel, and is being developed into an MMORPG. Paizo.com is also a leading online hobby retail store, offering tens of thousands of products from a variety of publishers to customers all over the world. 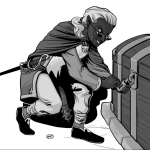 Elite 8 is up and Running

A Podcast About All Things Gaming ...
and Sometimes Wrestling

Friends of the Show